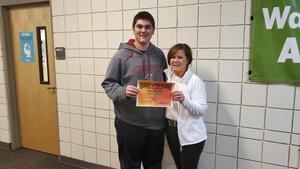 Pride: Tyson makes sure everything he does he does conscientiously and to the very best of his ability. He has shown great work ethic in a particularly difficult class this semester, and he seems proud of his achievements – but not overly so so as to be seen as arrogant.

Independence: Tyson does what he need to do to get everything accomplished. He has a difficult course load as many Honors juniors do, and he is accomplishing his work without issue.

Respect: Tyson shows respect for adults and peers, trying to include others and help others as much as possible.

Attitude: I have never seen Tyson have a negative attitude. This year, he has been derailed by an injury, and yet he is still displaying a positive attitude toward his fellow players and supporting them however he can by attending practices and games.

Trustworthy: I know if I need something done, and I can ask Tyson. He will do what I ask of him with his best effort.

Effort: Whether it is in the classroom, on the court, or in an activity, Tyson gives everything.

Show Kindness: Tyson always seems to have a gentle way about him, whether it is when he is trying to keep his little energetic brother in line or when he interacts with other students. I’ve never known him to be unkind to anyone.